The Enclave Series and Wallpaper Scroll, 2010, evolved out of the "My Girls" installation of 2009. Working with master print maker Vicky Tomayko, I began making stencils from the cutouts, as well as drawing and cutting a new set of characters to be used in the silk screening process. After screening the ‘positive’ of each stencil onto the plastic for the Enclave Series, the stencil was then cleaned off onto the wallpaper by placing it ink side down and pressing all around with my hands. The arrangement and colors of the figures on the plastic and wallpaper was arrived at intuitively. The more I worked on the series, the more intrigued I became with the mass of figures, the way they interacted with each other, the shadows they created on the wall behind the plastic, and the way they inhabited the flower garden background of the wallpaper. 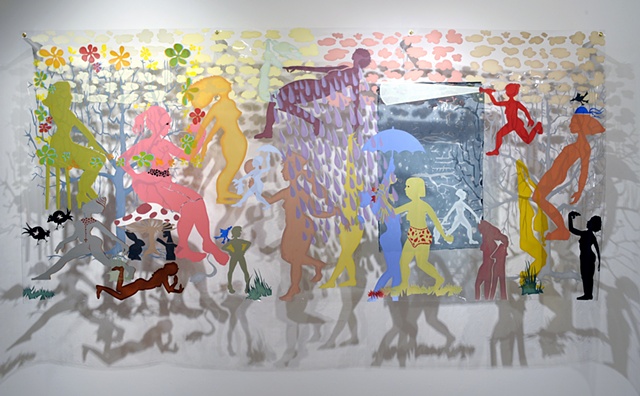